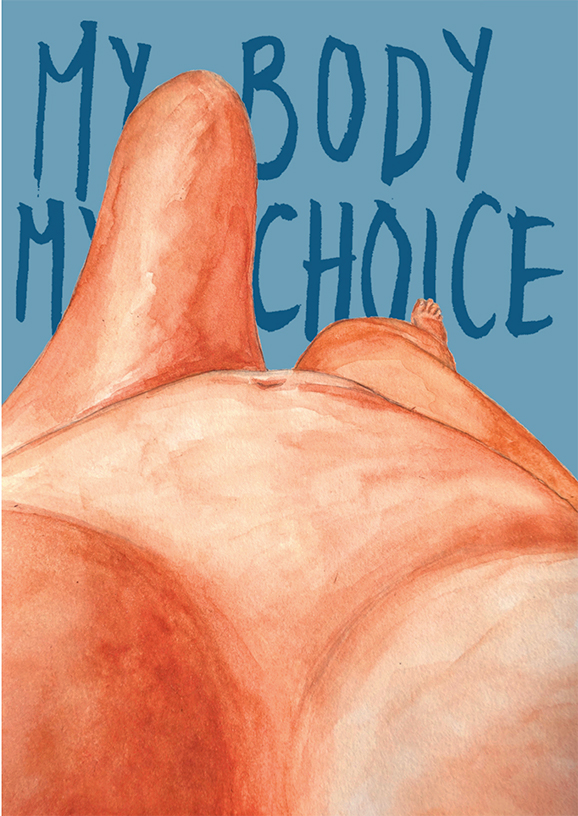 There always have been abortions

Bans on abortion do not hinder abortions, but lead to the situation where humans have to perform abortions in the shade of illegality. So, punishments of pregnancy abortions targets women, trans, inter and queer people (WTIQ in short)(1) from the lower class particularly. Because they do not have the money for treatment in sound clinics out of the country.

Thousands of people still die each year trying to have an abortion in secret. Looking to the USA and Poland, it becomes clear how quickly the right to decide about an unwanted pregnancy, for which feminists struggled fiercly, can be revoked again.

Why are we feminists fighting for the right to abortion?

WTIQ’s self-determination about their own bodies is a main concern for feminists. That’s why we defend ourselves against heteronormativity and any form of domination. We decide if and when we have children! The disempowering prohibition of abortions, however, forces us to have children regardless of whether we want or can.

We demand a change in society, in the sense of a community held together by solidarity, which includes people with disabilities and does not devalue them.

Of course, we not only fight for self-determined control of our own bodies, but also for a society in which our own economic situation and norms that are hostile to people with disabilities do not determine whether we want to stay pregnant!

On the current situation in Switzerland

The so-called “deadline rule” (Fristenlösung in german) has existed in Switzerland since 2002. This rule allows us a certain amount of freedom of choice – in the end, however, it is still not the person concerned who decides, but the law. Legal abortion bans are part of a long line of state rules for bodies and people. Abortion bans served then as now as a means of cementing reactionary family images and regulating society – often for racist reasons to preserve a „Western“ society that is supposedly threatened by migration.

What do abortion bans have to do with right-wing ideas? The anti-feminist mobilization for the „March for Life“ of the Christian Right attacks the right to self-determination and free exploration of sexuality and gender identity. They justify this paternalism with a right-wing and reactionary interpretation of Christianity that fits perfectly with other right-wing, if not fascist, ideologies. A central component of both is the Christian nuclear family, which has to consist of “man”, “woman” and the children, whereby the woman is seen as the walking incubator and the man as the protector and breadwinner of the family. The strict binary division of all people into „women“ and „men“ and the compulsory assignment of the respective roles is understood by them as the only, holy truth. Shame on people who love outside the heterosexual scheme or do not strive for a classic nuclear family; Shame on those WTIQ who do not see motherhood as the highest goal of their existence or do not care for „their husband“. The self-proclaimed „friends of life“ are nothing of the sort – on the contrary, they want to impose their life plans on all of us and therefore strive for the suppression and paternalism of our bodies and thus our lives. The rise of right-wing ideology always means an attack on the rights of WTIQ. When Christian fundamentalists march together with the SVP and neo-Nazis in Zurich, it shows the entanglement of the anti-abortion movement with the xenophobic, inflammatory, racist rhetoric of right-wing circles.

The strengthening movements against self-determination are an expression of an international strengthening of right-wing conservative ideologies. In the United States in 2019, in a climate of right-wing agitation, sexism and reactionary politics, total abortion bans were imposed in a growing number of states. In Poland, the right-wing conservative ruling party PiS wants to enforce a total ban on abortion despite massive opposition from the so-called „black protests“.

Resistance to the curtailment of our rights is stirring everywhere, including in the USA and Argentina. In Switzerland, too, we showed on the feminist strike day that there are many who rise up for self-determination and emancipatory changes in society. It just cannot be that we now leave this space that we have won over to people who trample on all of our demands for autonomy, for the renewal of old family models and for the freedom to love whom and how we want. We are many, we are strong, and we can neither be contained nor driven away!

It thus shows that this „March for Life“ movement not only attacks us WTIQs in our right to physical self-determination, and makes our lives unsafe when we have to abort illegally, depending on how much money we have.

These self-proclaimed “life protectors” also attack all those who do not fit into their narrow view of society and who strive for a small family with “woman as mother and housewife” and “man as food gainer”. In addition, many of their views, such as xenophobia and agitation against gay and lesbian people, are difficult to reconcile with the slogan „March for Life“ and the associated goal to protect life. As long as an emancipatory society based on solidarity is not stood up for in which no people with disabilities are discriminated against, no trans people are being attacked or people can decide for or against having children free of social constraints and money issues, we can only say: «’For Life‘, my ass»

(1)WTIQ: Trans people are people whose gender does not match the gender assigned to them at birth. Inter refers to people whose sex characteristics do not correspond to either of the categories „man“ or „woman“. (Gender-) queer people move between or outside of these two categories. Gender is a spectrum and the division into the two opposing categories „man“ and „woman“ is socially constructed. Not every person with a uterus is a woman, and not every woman can become pregnant. It is therefore extremely important that safe access to abortion is also available to trans, inter and queer people.

(2) Ableism means that people are discriminated against and devalued because they are unable to meet certain physical or psychological requirements considered to be the norm. 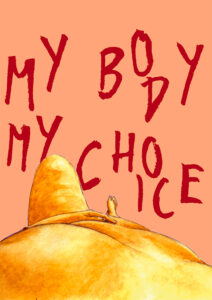